HomeUncategorized enHow to distinguish a Rioja wine from a Ribera 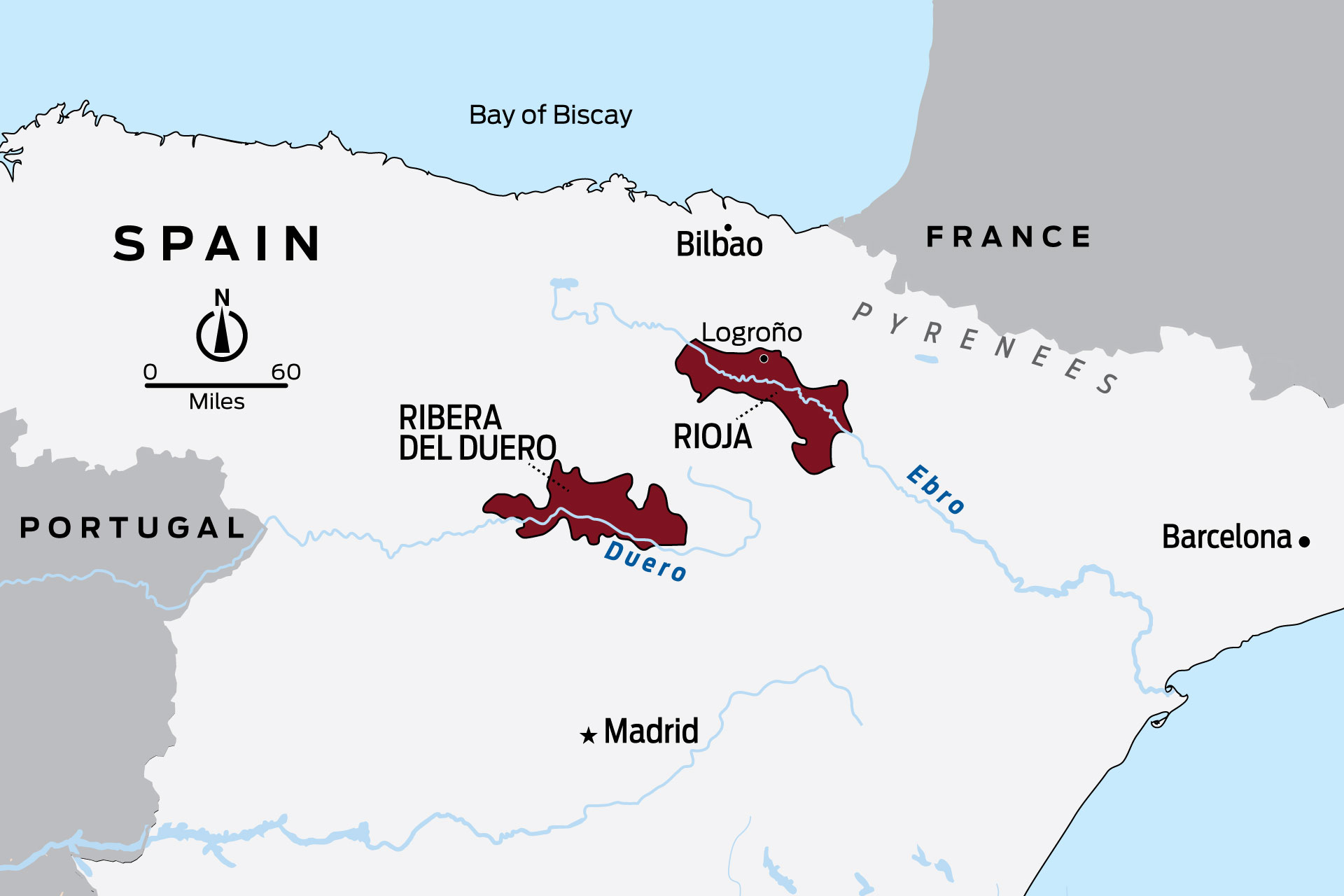 Because we know that comparing Rioja and Ribera wines is something that fascinates all wine lovers, here is a practical guide for the uninitiated.

For whatever reason comparing red wines from the DO Rioja with those from the DO Ribera del Duero, “Riojitas VS Riberitas” as it is called, is something that fascinates people, both amateurs and professionals.
To such an extent that the ability to differentiate one from another, in a blind tasting, can become a matter of great importance and garner respect!

Enthousiasts take master classes in history, regions, varieties and diversity of references so that they may, just by tasting the glass in front of them, where it originates.

This can really be a demanding test, it is not so uncommon for the greatest competition winelovers to fail, confusing an Artadi with a Vega Sicilia, a Sierra Cantabria with a Hacienda Monasterio or an Abel Mendoza with an Antídoto.

And it is necessary to take into account that they are regions with many similarities. In both, the Tempranillo grape variety is the protagonist (almost absolute in the Castilian case) and the vinifications can be very similar.

How to differentiate Rioja and Ribera? Some examples:

The first trick used here is the vintage of the wine. It is possible to differentiate the following reference since Malleolus, given its youth, will be much more astringent than its tasting partner.

Look for a sensation of dryness and more primary aromas, specifically notes of wood, in the form of coconut and toasted aromas, which are much more present than in the Muga.

However, the Muga, without being the most characteristic example of the classic Rioja, will present greater subtleties, less forcefulness and more definition, with aroma of vanilla.

Now let’s try to distinguish a Ribera Pinea from 2017 versus a Rioja Contino, Viña del Olivo, Reserva from 2017

Pinea is the result of a Mexican incursion into Valladolid. Although it is from the same vintage and has a similar style to its rival, it is more timid, less powerful.

It may seem antinomic that a Ribera del Duero feat. Mexico is subtle, but here it is. They are similar but Pinea is more austere, in the most elegant meaning of the adjective.

Contino is one of CVNE’s prestigious brands whose winemaker Jorge Navascués, is taking it, specifically Viña del Olivo, to a new level.

Viña del Olivo is a fairly forceful red and not in a negative sense either, on the contrary, it is well equipped with everything. It is fruity, balsamic and has a very long flavour, although 2017 is not its best version. Don’t appeal to its varietal composition either: even if it’s a Tempranillo with 10% Graciano, you won’t be able to notice it.

Here the trick is to look for the impact. In this case, the one that sticks the most must be the Rioja.

Now a tough one, two of Spain’s most luxurious exports; the Ribera Bodegas Vega Sicilia, ÚNICO from 2011 and the Rioja La Rioja Alta S.A. Gran Reserva 890 from 2004

Here it gets very difficult, as we are facing two world-class reds capable of holding their own with any other red reference that comes to mind.
One of the most valued Spanish wineries internationally, if not the most, Vega Sicilia was founded in 1864, although it was not until 1915 that they put their first vintage on the market. Winemaking here goes back much further than the constitution of the DO Ribera del Duero, which dates back to 1982.

Vega Sicilia, ÚNICO arguably presents the greatest expression of Tempranillo (or Tinto Fino as it is called in these parts). This is a pre-Ribera del Duero Ribera del Duero and an example of a “fine” wine of the time. This was how the wines of the highest category were called, which at that time only Rioja could access frequently.

A little confusing to say the least.
La Rioja Alta is another winery ‘living legend’ guarding the most traditional style of red wine from Rioja. The 890 is their highest-end red. They only release it to the market in its most exceptional vintages, the last one for sale is 2010 and the previous one was 2005. Restrained and earthy, delicious.

We recommend though that you go out and do your own wine tasting with a variety of different Riojitas and Riberitas in whatever price racket suits you to learn the differences and, although this is a serious business, remember to enjoy!